Vice president for Twitter and creator of the ever popular business podcast: Eat Sleep Work Repeat,Bruce Daisley wants us to start enjoying our jobs again.

On a mission to banish burnout, he’s brought his years of research and thinking together in his new book The Joy of Work: 30 Ways to Fix Your Work Culture and Fall In Love With Your Job Again. Yesterday a few of us spent a lunchtime listening to him passionately talk through some key ideas.

‘Does anyone remember when the first person in the office got a blackberry?’ he starts, recalling how eagerly we accepted email on our phones and how it felt glorious because we thought, ‘If I can deal with my emails on the Tube, then I can muck around more in the office’.

What actually happened is the average working day went from 7.5 hours to 9.5.

This changed how we work and, as a result, he believes we’ve systematised stress.

Until at breaking point, we don’t comprehend we’re stressed. ‘It’s like being drunk’ he says. If you suggest to your drunk friend that perhaps they shouldn’t have another drink their answer is likely – but I’m not drunk. 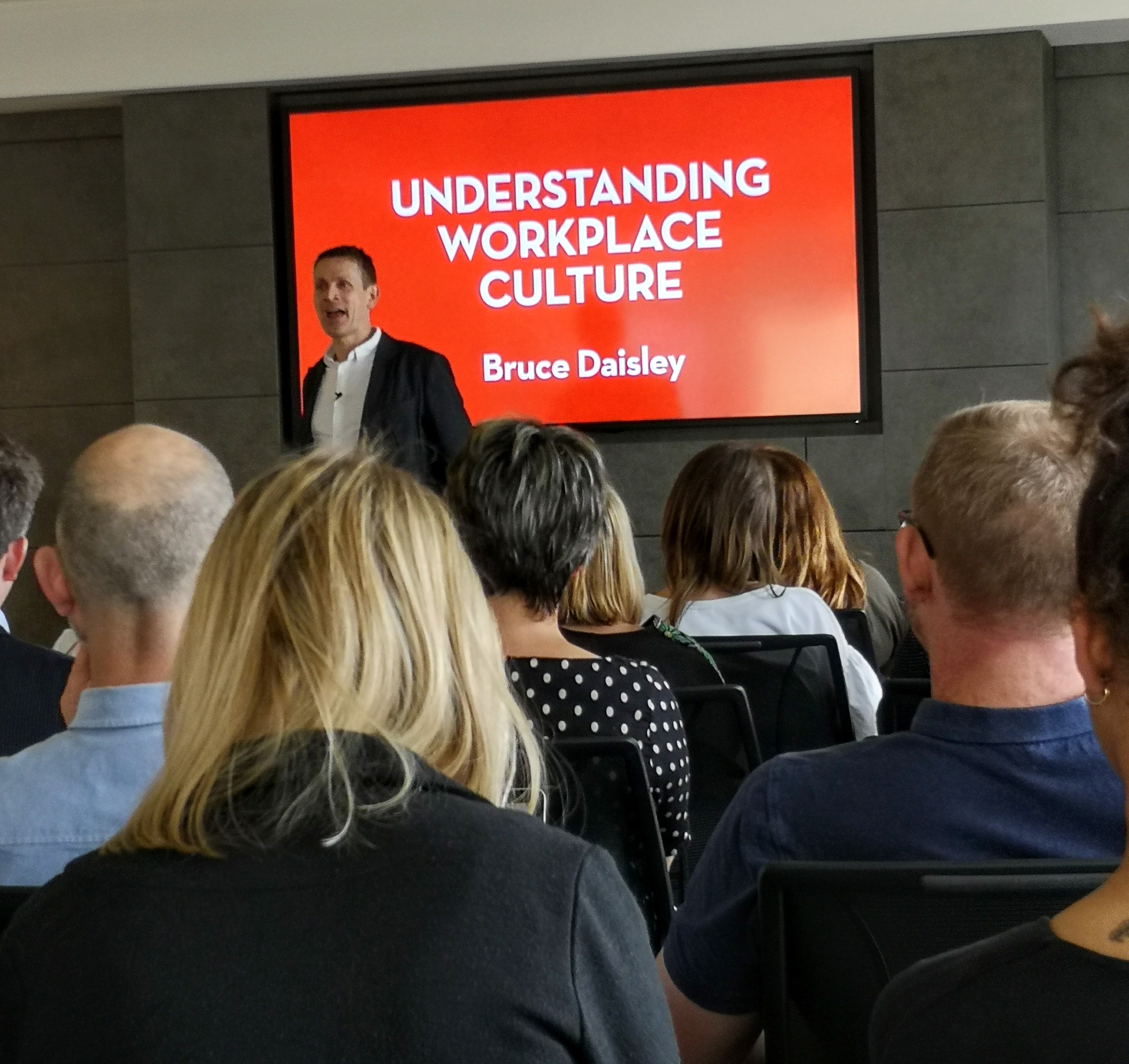 ‘Anyone noticed that Gmail is starting to finish your sentences?’ Daisley continued. Machine learning is going to start taking over parts of our jobs.  They thrive on process and predictability so we need to navigate to skills such as ‘ingenuity, creativity and guile’ which only we, as humans, can own.

But here’s the challenge: ‘Stress stops our capacity for creativity’.

Here’s 5 key things we took away from the rest of the talk and will be discussing in the office over the coming weeks:

Connect on a human level

“When we feel a connection, a synchronization with others, we change our behaviours.” Daisley talked about strangers who were put together to sing in a choir. Asked afterwards if they trusted their fellow singers, the response was yes, despite not actually knowing them at all. We gain energy from face to face interactions, which is why it’s so important to keep them as part of our working day.

Likewise, he’s a strong advocate of laughing together. Luckily, it’s the act of connecting on a human level that’s important – not always how funny something is!

Daisley cites Elon Musk and how he said he worked 120 hours in a week, would sleep at work and saw this behaviour as a show of leadership. Daisley says there’s a danger that people will listen to that and think ‘that’s what’s required to succeed’. He strongly believes we need to look at the science behind how long hours and stress can affect you.

He says we need to ‘re-invent and re-imagine work’. ‘No heroism, long hours or hustle’.

Only by celebrating less hours and being truthful about how we’re working will things change. 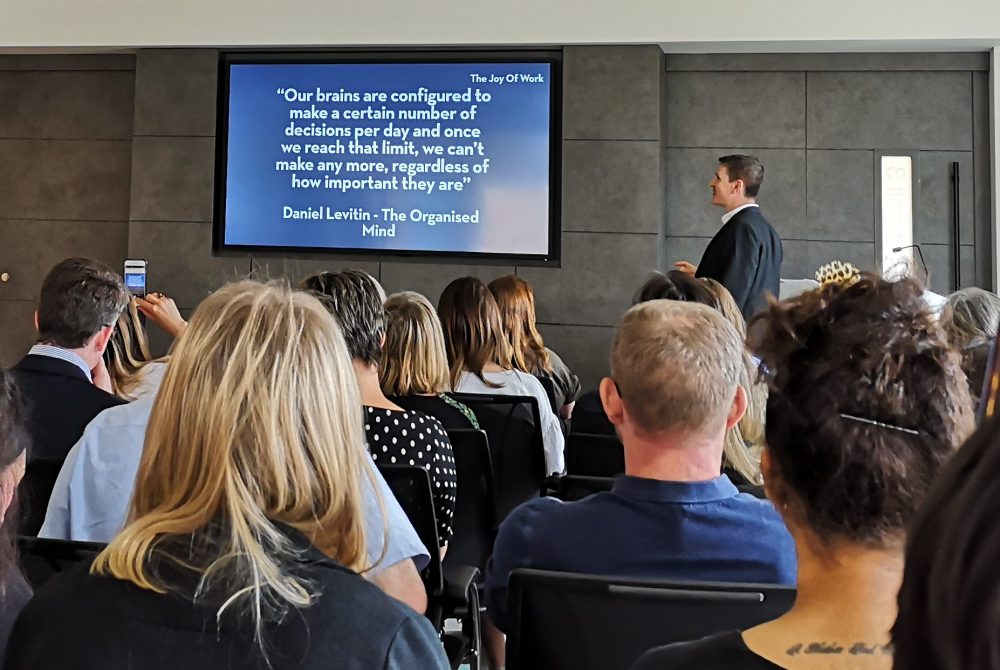 Daisley quotes David Levitin (The Organised Mind): ‘Our brains are configured to make a certain number of decisions per day and once we reach that limit, we can’t make any more, regardless of how important they are.’ So, it’s our responsibility to use those decisions wisely. Daisley talks about the research showing 40 hours per week to be the maximum amount our minds can work before we stop making good decisions. Charles Dickens, a prolific and successful writer, worked 5 hours in the morning and spent the afternoon doing 10 mile walks.

That leads onto the reality that our best ideas don’t come to us when we’re poised staring at a screen, hand on our mouse. Perhaps you find you have your best ideas when you are look out of the window on a train, out walking or in the shower.  He says, ‘Aaron Sorkin who wrote, “The West Wing”, noticed he was having all of his best ideas when he was in the shower and so he installed a shower in the corner of his office’. He says he takes eight showers a day.

Our brain’s daydreaming ‘default’ mode is when most of our creative thinking happens. So long hours do not necessarily mean increased productivity. Coming back to Levitan there are only so many decisions we can make every day.

Create a manifesto of what ‘good working’ looks like

You can’t tell someone to take lunch breaks. If you take autonomy away, you don’t get the same benefit. It’s about modelling good behaviour rather than dictating it.

This initiated questions around company values. Stating that you’re ‘Open and Honest’ he says, can only really ring true if another company would put that they’re ‘dishonest’ – which of course they wouldn’t. Culture exists more authentically at smaller levels. Therefore, you need to allow for local team interpretation.

Don’t open your emails at the weekend

This is Daisley’s number one no no. Cortisol levels heighten when you open business emails. Doing so over the weekend, when you should be recharging your brain for the next working week, can lead to raised stress levels overall. He says, If people tell you it makes them feel better they are often mistaking the relief they get after they see that nothing bad has happened.

However, he did say that banning access to emails in the evening isn’t helpful. It stops flexible working and an individual’s ability to manage their working week alongside their out of work commitments.

I’m looking forward to reading The Joy of Work or, as he calls it, the ‘troublemakers’ manifesto’ in full.