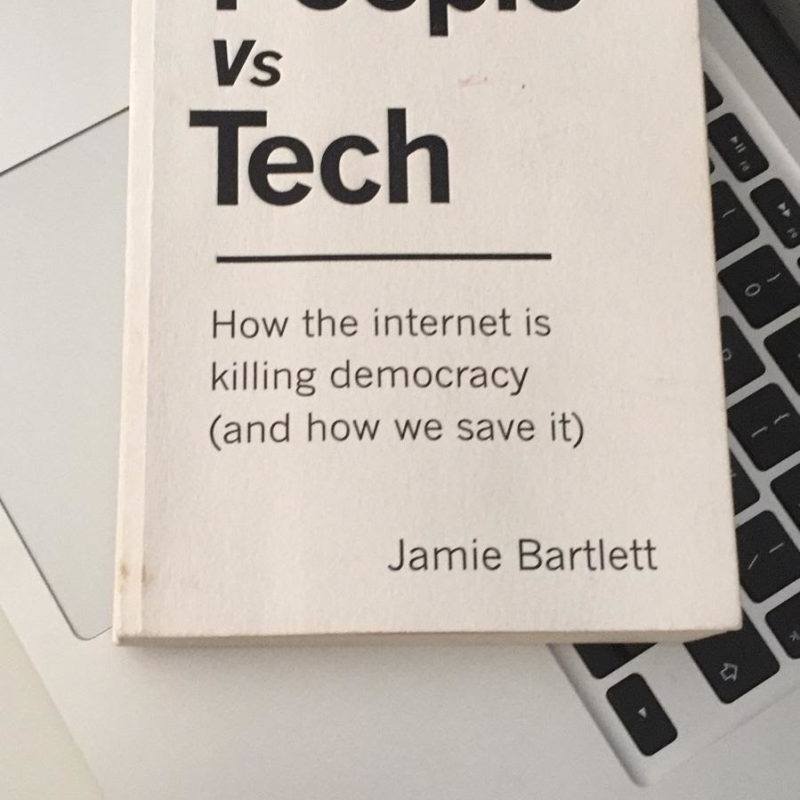 The People vs. Tech: How the internet is killing democracy (and how we save it)

‘Any grand struggle between two incompatible systems can result in only one winner. Either tech will destroy democracy and the social order as we know it, or politics will stamp its control over the digital revolution.’

The People vs Tech is about the relationship between technology and democracy. In it, Bartlett asks whether we have unwittingly handed too much power to the ‘shadowy powers behind a wall of code, all manipulated by a handful of Silicon Valley utopians, ad men and venture capitalists’.

As someone who falls into the category of ‘ad men’, I feel it is my responsibility to read and understand this book and to be hyper-aware the influence I have in handling personal data and manipulating behaviour.

Barlett is unequivocal in his conclusion that tech is winning this battle, and argues in compelling, fascinating style, with impeccable credentials and research. But this book is saved from being a harbinger of doom by the book’s final section in which he outlines six key pillars of democracy that we can hang on to as individuals, and by the click-bait style closing chapter, ‘20 ideas to save Democracy’. This is no flip conclusion, however. I was left with a new awareness of what is really going on around me, what the real implications of the echo chamber of news and social posts that we are all becoming exposed to may be, and how the ability to debate, disagree and indeed learn from others is under threat.

This challenged my assumptions that my work is part of a benignly commercial world, that gently persuades people to part with slightly more money than they otherwise would have done. In fact, my industry has the potential to support this erosion of democracy.

If this sounds like pretty heavy subject matter then it certainly is. But the writing style is fluid, light and incredibly easy to tackle. I read this lying on a beach in Corsica. It’s not your standard holiday paperback, however. Don’t expect to come home with the same world view as you left with.

Jamie Barlett is a journalist (Telegraph, Guardian and Spectator) and author, and, until very recently, Director of the Centre for the Analysis of Social Media at cross-party think tank, Demos. Educated at Oxford and LSE, Jamie Bartlett is one of the UK’s leading thinkers on politics and technology.

He is also author of Radicals (2017) about political outsiders and best-selling The Dark Net (2014) about internet subcultures, which has been translated into 13 languages. Jamie also co-authored #intelligence with Sir David Omand, which explores the use of internet intelligence by the security services and the police. His TED Talk about how dark net technology is changing the nature of cybercrime has been viewed almost 3 million times.

Armadillo Asks: Ella Johnson
Instagram takeover: Bex Hopkins
We use cookies to ensure that we give you the best experience on our website. If you continue to use this site we will assume that you are happy with it.OkPrivacy policy